It’s not news that the American Academy of Pediatrics advises against trampoline park use for minor children, especially under 10 years old.

However, if this is news to you, please read the article here.

The AAP has been advising against minor children using trampoline parks and at-home trampolines for nearly a decade.

The following data, which was obtained by the folks over at Roller, shows just how many kids are actually jumping.  Although the results are staggering considering the AAP’s advice, keep in mind that this study only measured approximately 50 trampoline parks over a few month study. As of 2018, there were over 600 trampoline parks in the United States alone.

The most common age of a jumper is 9 years old.  With the age group of children between 6-10 coming in at the highest population of jumpers, 35%.  The second highest age group are 11-15 year-olds, coming in at 26% of all jumpers.  Toddlers, which are labeled as children 1-5, also represented 13% of all jumpers in these parks over the several month study.

Combined, this brings the total amount of jumpers under 18 years old, to a staggering 74%.

What does this mean? . . . children are more likely to be injured than adults.

When compiled with all of the other data, including the skyrocketing injury rate from trampoline park use, up 211% from 2014, minors make up a large majority of those jumpers.  When the majority of jumpers are below 18 years old, and injuries on the rise every year, it’s inevitable that more children are going to be injured at these parks. 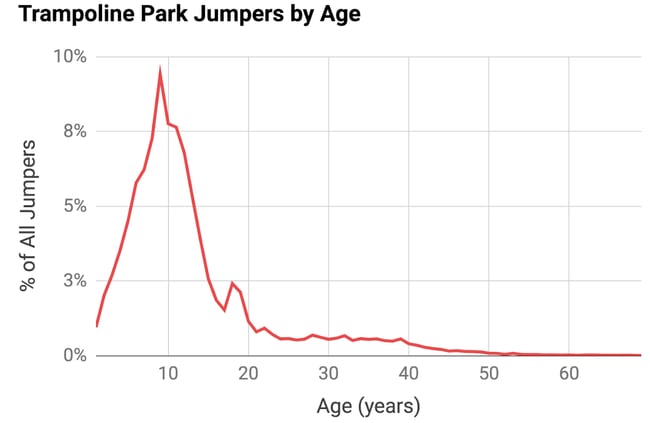 More recently, in September of 2019, the AAP has again published a study that confirms their previous position. “Younger children are much more likely to sustain an injury on a trampoline.”

Approximately 75% of trampoline injuries occur when more than one child jumps at a time, and the smaller child is approximately 14 times as likely to be injures as the smaller one. (Wootton M, Harris D. Emerg Med J. 2009;26:728-731).  Not only are children jumping at a much higher rate than adults, these cost of these injuries is having a massive impact on the health care system. The cost of these injuries to the U.S. health care system is astronomical. From 2002 to 2011, the ED expense for treating these injuries was over $1 billion (Loder RT, et al. J Pediatr Orthop. 2014;34:683-690).

Unfortunately, all of the above numbers show no signs of slowing down.  With only a few States regulating trampoline parks, and no Federal regulations currently in place, the future is grim for any mandates increasing safety protocol in trampoline parks around the country.

You May Have a Case!

Depending upon what state you live in, the waiver you signed on behalf of your child may be completely invalid.  Read more or call us now.  844-NO-TRAMP